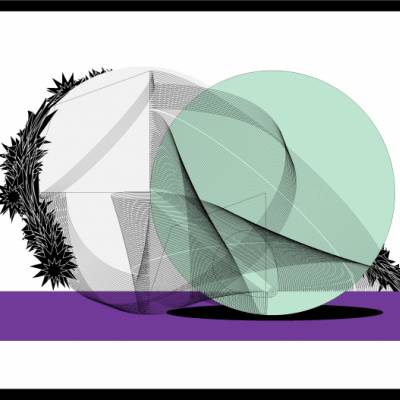 The artist Kamen Starchev has been experimenting several years in the sphere of graphics. His compositions differ though by not having any common grounds with classical graphic technique, for they are entirely computer generated. A comparison may likely come to mind, since seen from a far, the works may have a rather classical appearance in the manner of molding the form and in the way it is offered to the viewer. For such a comparison contributes that the works are made in only one print, which inevitably increases their value.

Kamen Starchev created his compositions by adopting the possibilities that the vector graphic programs offer and unravel an original "intellectual game", which he indulges in freely composing a web of forms and line-engraving. In this sense the graphic computer programs assists at the most the creative process in the sphere of the graphic art skipping tedious and strenuous work of the classical graphic artist.

Cliche as it may be for a conclusion and entirely justifiable in the case of Kamen Starchev - the artist has succeeded in creating a whole world of images. This world is predominantly abstract and geometric, in black and white with separate elements in blue, yellow and purple. The works are titled the "Asylum", "New Land", "Requiem", "Lemon", "Mystery in rags", "Dream"… Every detail in them seems meticulously projected and as a whole the series is minimalistic. This minimalism is close to the imagery of the Chinese and Japanese graphic art, in which everything is delicate and well balanced. Though in Kamen Sarchev's works we notice contrasting combinations of round and sharp forms and exactly in this "delicate prickliness" reveals the unique aura of his works.