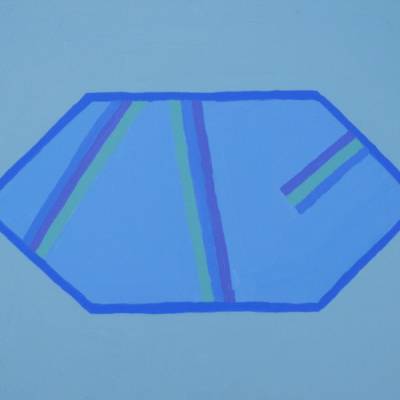 Arosita gallery features the acrylic works of artist Sasho Stoitzov - a series of minimalistic works without titles. He started working on them in New York and continued the series in Bulgaria.

Sasho Stoitzov established himself as one of the most important artists of the Bulgarian modern art and marks key findings and influences - from hyper realism in the beginning of the 80s, through his participation in the exhibitions in Blagoevgrad and Targovishte to the unforgettable creations in the exhibitions of "Earth and sky"(1989), "N-form? Reconstructions and interpretations"(1994), "VideoCharter"(1995), in the first international biennale "Africus 95", Johanessburg, South Africa and many others.

In 1988 Sasho Stoitzov is one of the curators and participants in the legedary artistic exhibition “11.11.88” - a pioneer forum of conceptual art in the country. In 1989 he organizes the First National exhibition for unconventional art in Bulgaria “11.11.89” in the National Gallery in Blagoevgrad.

His is probably the only authentic manifestations in the sphere of "Socialist pop art" in Bulgaria.

He began his career as a painter and is one of the first to react to the socio-political changes at the end of the 1980s. His works from this period are embedded in the bulgarian classic avantgarde. Stoitzov is amongst the few, whose manifestations we regard as Socialist art.

Svilen Stefanov characterizes him as "the most true follower of fotorealism in bulgarian painting" of the 1980s. Boris Danailov says of his art - " a series of this work are most probably the only (and truly authentic) manifestations of Bulgarian Socialist pop art. The method of overthrowing idols is quite clear and simple. The ironic reference, the distortion of the sacred - this whole avantgarde tradition is his strong point.”

Since 1998 Sasho Stoitzov lives and works in NY.