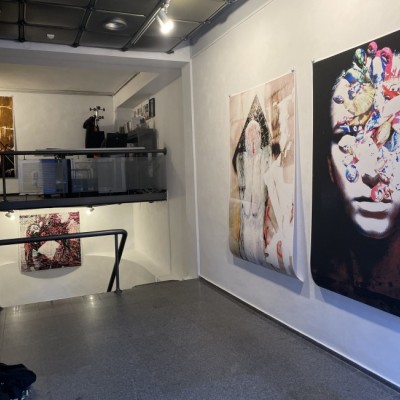 „...I saw all the mirrors on earth and none of them reflected me...“ _Jorge Luis Borges

1949, the Argentine writer Jorge Luis Borges publishes the story „The Aleph“. The plot revolves around a mystical point - The Aleph - which is ironically located in the basement of an amateur poet and acquaintance of the narrator. From here, according to the poet, you can see all parts of the universe at the same time and from all perspectives. The view through the aleph gives the viewer the feeling of omnipresence and omniscience. And so the poet in Borges succumbs to the delusion that he can grasp the whole world. He considers himself an intimate connoisseur of events, things and people that exist far away and independently of him.

Borges‘ story seems to us today anticipatory, almost prophetic, in view of the tsunami of images that breaks over us every day. After all, the view into the Aleph, which tries to grasp the whole world, shows great similarities in an amazing way with our view into the World Wide Web and the social media today.

Unimaginable, is the agonizing thought in view of the rapidly increasing flood of stirring, dramatic often also trivial images. With breakneck speed, impressions rush ahead of comprehension. Show us images of what has not yet been captured and reflected in words. Images that address our attention, but not our judgment. There is a total presence of decoupled events, themes, people. A present that creates a „brave new ‚media world‘“ with increasing participation of private users.

Often, these are pictures taken at the scene of the event and shared immediately afterwards on the World Wide Web and social media. A sharing that transcends borders, continents and language barriers. A sharing that shows us beaming faces and breathtaking nature shots, happy stars and cute baby animals. A sharing, however, that also shows wars and popular uprisings, natural disasters and suffering people, victorious politicians and bloodied soldiers, collapsing houses and devastated landscapes.

Again and again we are presented with these images. Again and again we look at them. Time becomes an endless loop. But doesn‘t this showing just represent a throwback to primitive times? To a time when people had not yet learned to face the world with language? When we could only point to the world without being able to interpret it?

„...I saw all the mirrors on earth and none of them reflected me...“, is Borges‘ sobering conclusion and punch line. The view that seeks to grasp the whole world proves illusory. The poet remains just as distant from the world as the lonely viewer in front of the screen. This view does not bring us closer to the world. Nor does it make it any easier for us to understand.

If we want to escape the delusion of a total presence, we should sharpen our own perception of the world and of time. Our mind, our thinking and our language are not able to grasp everything at once. We need time to structure the flood of images, data and information, to weigh them up and put them in a meaningful sequence. We need time to set the contextual framework, to understand and classify the connections. Likewise, we need time to find meaningful words and formulate sentences. Should we not take this time, we run the risk of finding ourselves, as Heiner Müller says, in the „...white noise ... after the end of the broadcast...“ in which all language fails - in absolute speechlessness.

Assen Janev, born in Sofia, studied art and media sciences, history and political science at University of Konstanz/Germany; currently based in Base/Switzerlandl. Assen Janev is a multidisciplinary artist working in a variety of media including photography, collage, drawing and painting. He explores the mechanisms of medial representation and the ambiguity and construction of human identity. The focus is on questions of individual and collective transformations, memory and transience, diversity and migration as well as personal and collective myths.